The Climate Trust | Marching for Science, Not Silence

Marching for Science, Not Silence

On Saturday, April 22nd, The Climate Trust team took to the streets in celebration of Earth Day and to support the use of sound scientific data in national and global decision making. 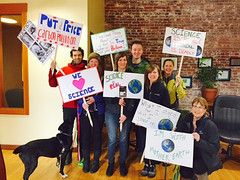 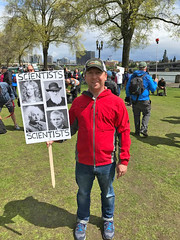 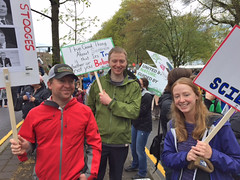 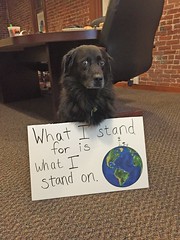 We were inspired by many of the demonstrators and their displays of passion for safeguarding the scientific community at the Portland, Oregon March for Science. The recent mischaracterization of science as a partisan issue, which has given policymakers permission to reject overwhelming scientific evidence in a variety of disciplines, is a critical and urgent matter. The Climate Trust supports scientific research and evidence-based policies with a large percentage of our team feeling motivated to take a public stand and participate in making our voices heard.

The March for Science was a celebration of our passion for science and the many ways science serves our communities and our world. The Portland event was an impressive gathering of science enthusiasts joining together to acknowledge the vital role science plays in our lives and the need to respect and encourage research that gives us insight into the world.

Our team had an exhilarating day, but the movement cannot end with this march. It is imperative that we continue to celebrate and defend science at all levels, from local schools to federal agencies. Sound science protects our air and water, preserves our planet, saves lives with medical treatments, creates new industries, puts food on our tables, educates the next generation, and safeguards our future.

Here are just a few of the reasons our team chose to #MarchforScience.

Science serves us all.